I co-host a podcast called My Alchemical Bromance, and one of the frequent challenges I end up facing is how to record video and voice chats for interviews. A lot of podcasters use external hardware devices, such as the Focusrite Scarlett 2i4, which is a great solution. But I wanted to do it all in software—and in Linux. 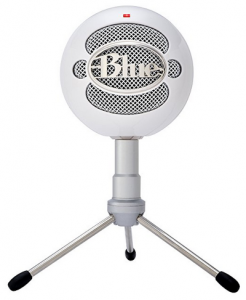 For this setup, you need headphones, a microphone, and an Internet connection. I use a Blue Snowball USB microphone, which is affordable, sturdy, and great quality for just recording a podcast.

Anybody who’s played with audio stuff in Linux knows that it’s a total mess. I’m not going to try to explain it all in detail because I’ll get it wrong, and even this section I’m probably going to get wrong. Feel free to correct me loudly in the comments. There are two very common audio interfaces that we have to deal with. First is ALSA, which is the Advanced Linux Sound Architecture and is the hardware driver layer of the audio system. Next is PulseAudio, which is a sound server that abstracts the hardware layer.

We need two pieces of information from PulseAudio: the system sound monitor, and the microphone monitor. Run the following command:

The bits you’re interested in are the “Name” for the analog-stereo.monitor entry and the analog-mono entry. In my example, you will find them on lines 3 and 11. Save those for the next step.

Because we’re going to use an ALSA-compatible tool for recording, we need to configure ALSA to talk to PulseAudio (which then talks to ALSA again on the backend – like I said, audio is confusing in Linux and I’m sorry that either of us has to spend any time thinking about it). You will want to open $HOME/.asoundrc and add the following entries.

I won’t strongly recommend any particular voice or video chat software in Linux over another. There are a few good ones I’ve used, such as Google Hangouts and Zoom. I’ve used Google Voice to record phone calls, too. Skype has been problematic for me, with lots of drop-outs and weird volume issues, but that could just be my setup. You will need to experiment and find out which works best for you.

We will use Ecasound to record to hard disk. To install Ecasound in Ubuntu (and probably Debian), run this command:

To start recording, run this command:

This setup essentially uses two different hardware devices to record audio, so it will have one glaring problem: no two hardware timing clocks are the same. Both are sampling at 44.1kHz, but the crystals used to do the timing will never exactly be at 41,000 samples per second. The variation compounds over time, so for long recordings you will notice unusual lag. This is probably why so many podcasters go for an external hardware solution. But if all you’ve got is a USB microphone and the truth, a software solution will have to do for now.

I hope this helps you do better, smarter podcasting. Podcasting in Linux is tricky. There aren’t a lot of good tutorials out there, so you’ll still have to figure a lot out on your own. If you have tips or tutorials that helped you out, please include them in the comments below! I certainly need them.